SAN MATEO, Calif. and MAKATI CITY, Philippines, Sept. 15, 2014 /PRNewswire/ — NetSuite Inc. (NYSE: N), the industry’s leading provider of cloud-based financials / ERP and omnichannel software suites, today announced that Coca-Cola Foundation Philippines, which since 1987 has helped improve access to education, clean water and economic opportunity to hundreds of thousands of Filipinos, has recently gone live on NetSuite after retiring its on-premise software for the greater functionality, efficiency and capacity for business growth available through NetSuite’s integrated cloud business management software suite. Upgrading to NetSuite, Coca-Cola Foundation Philippines is able to run its core business processes – all within one integrated software system and without a dedicated IT staff. As a result the nonprofit organization has gained process automation, and real-time visibility into critical business metrics not possible with its previous software to better fulfill its mission of socioeconomic improvement.

“NetSuite is helping us operate more efficiently so that we can put our time and energy into making a meaningful difference in the lives of underprivileged Filipinos,” said Cecilia Alcantara, President at Coca-Cola Foundation Philippines.” Using NetSuite, we are able to significantly preserve resources for our projects, and the new software gives us the ability to clearly present the value of our work and the donations we receive to our stakeholders.”

With its previous system, Coca-Cola Foundation Philippines experienced limitations in functionality, process synchronization and visibility that inhibited its growth potential and the ability to better manage and measure the impact of its educational, water-related, youth empowerment and disaster relief programs. The organization, which was established to demonstrate the long-term commitment of Coca-Cola to corporate citizenship in the Philippines, also looked at other software options and after rigorous evaluations chose NetSuite’s cloud-based software suite, reducing its IT costs. With NetSuite, Coca-Cola Foundation Philippines has achieved the following benefits:

“Coca-Cola Foundation Philippines is an important and well-recognized organization that has made a huge impact for nearly 30 years with its continued commitment to building a better Philippines for generations to come,” said James Dantow, NetSuite VP for Worldwide Support and General Manager for the Philippines. “We’re delighted that they have selected NetSuite to improve their financial management and project delivery and are proud to support them as a grantee of the NetSuite.org corporate citizenship program.”

NetSuite. Where Business is Going.

Something about second to the last days (aka Day 4)

In Acts 16:29 the jailer in charge of Paul & Silas’ cells called for lights, rushed in and fell trembling before Paul and Silas right after a strong quake that practically broke every prisoner loose. He then brought them out and asked, “Sirs, what must I do to be saved?”
The jailer wouldn’t ask this if Paul & Silas weren’t consistent in their business, even in their prison cells. The jailer knew what they were about — and it was to spread the good news — that Jesus died for him, for his salvation from eternal damnation brought about by sin.
Perhaps the message was already shared once (or even many times) with the Jailer before this earth-shaking situation. It was possibly only during this particular situation was when the Jailer’s heart became open to this good news. How about you, do you have a friend who has shared the good news to you? How did you respond?
Let’s not wait for a violent earthquake to happen just to shake you off your inner prisons, listen to what the Lord is telling you this very moment. He has been knocking at the door of our hearts. 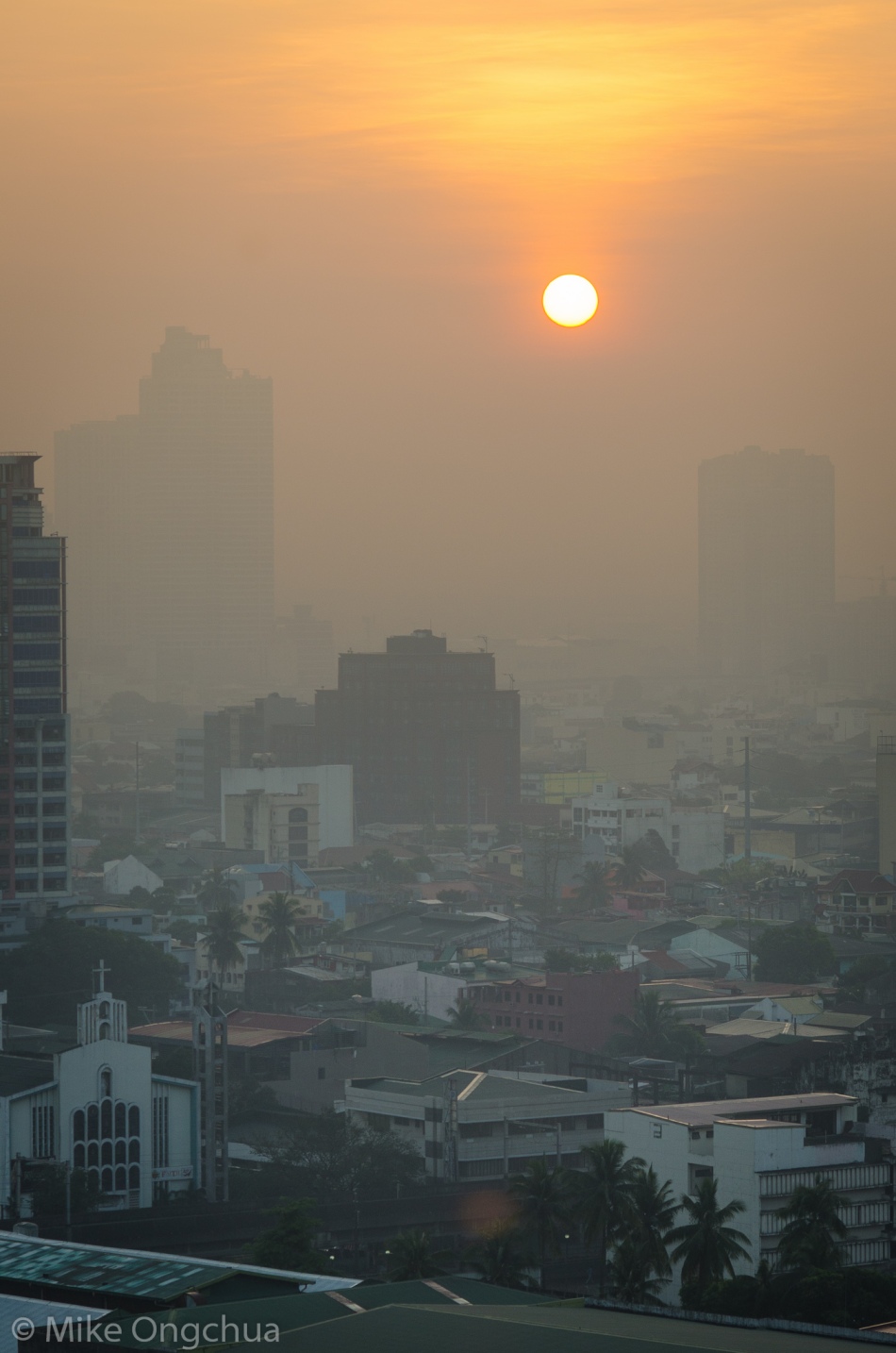 I couldn’t resist taking a snapshot of the rising sun as I was watering the plants one early morning. Capturing a sunrise definitely is one of those relatively rare moments for me, let alone one that had its glorious light filtered out by a layer of smog. I do hope that we don’t reach Beijing-like levels of noxious air, but what can we actually do about it?

Here are some images I took from a surprise birthday dinner I’ve been invited to. The restaurant’s name is Rose and they serve Japanese “enhanced with classic French cooking techniques“. The chef had whipped up some simply fascinating combos from his kitchen that night.

I realize that there’s quite a number of folks in my network who’s had their birthday on February, if you happen to be one of them, allow me to greet you a happy birthday!

I loved the salmon rose & the edamame. The green beans amused me so much that I decided to physically pull each seed out of the pods so I could share with you its ‘inside-story’.

And don’t let the dessert fool you, the chocolate flame packed a bold piquant flavor blend that made me want some more. It definitely is a must-try!

“If it feels right, then yeah by all means do it!”

Do these statements sound familiar?

Problem with this thinking is that there’s no absolute truth to these situations. To those who subscribe to this type of thinking may easily argue that “it may not be good for you, but it’s totally fine for me.”

What does the Bible say about the human heart?  While the world says “follow your heart”, the Word says “your heart is deceitful“. In other words, we’re not supposed to follow our own hearts, since we’d easily become wayward and it would be a step away from God’s heart.

One example of this is when Saul decided to disobey God by following his own heart, and in so doing was on his way to being replaced as king of Israel.

Even king David, who is better known as “one who is after God’s own heart”, thought that he deserved a “break“. Or perhaps he was saying to himself, “I deserve to be happy, after all, I am king.” The moment he followed his heart, he was deceived into thinking that he can do things on his own terms and outside of God’s will and purpose for him. When he listened to his heart, he thought that he could easily fix problems on his own without seeking God’s guidance. It certainly led him to a series of sins that he would soon deeply regret. Even if people don’t find out or worse – if people actually agree with you in your wrongdoing, God knows.

What should we be doing then? Let us guard our hearts and be a people after God’s own heart.

Do you feel that you need a break? Get down, pray, and talk to God. God is not limited. God is not stingy. When we follow our heart’s pleasures and not His pleasures, we end up despising God. Let’s not despise the reading of His Word.

David repented when he heard God’s warning through prophet Nathan’s story.  Be alert of those little compromises that we slowly and seemingly build into something we suddenly become “proud” of. So watch out! Guard your heart and let’s have the same attitude of repentance (David’s example) and not of arrogance (Saul’s example).

God’s level of love differs from the way we love. God’s amazing love is just awesome, He is a God of restoration.

Do you believe in the saying “Follow your heart”?

Today’s breakfast was the usual – eggs!

I’ve created an omelet with tiny blocks of cheese before among other ingredients, but haven’t tried grating the cheese before putting it in the pan. So that’s what happened this morning – pretty easy stuff I’d say. Grate the cheese onto the egg, add the right amount of pepper & salt, a pinch of basil leaves, and off to the beating! 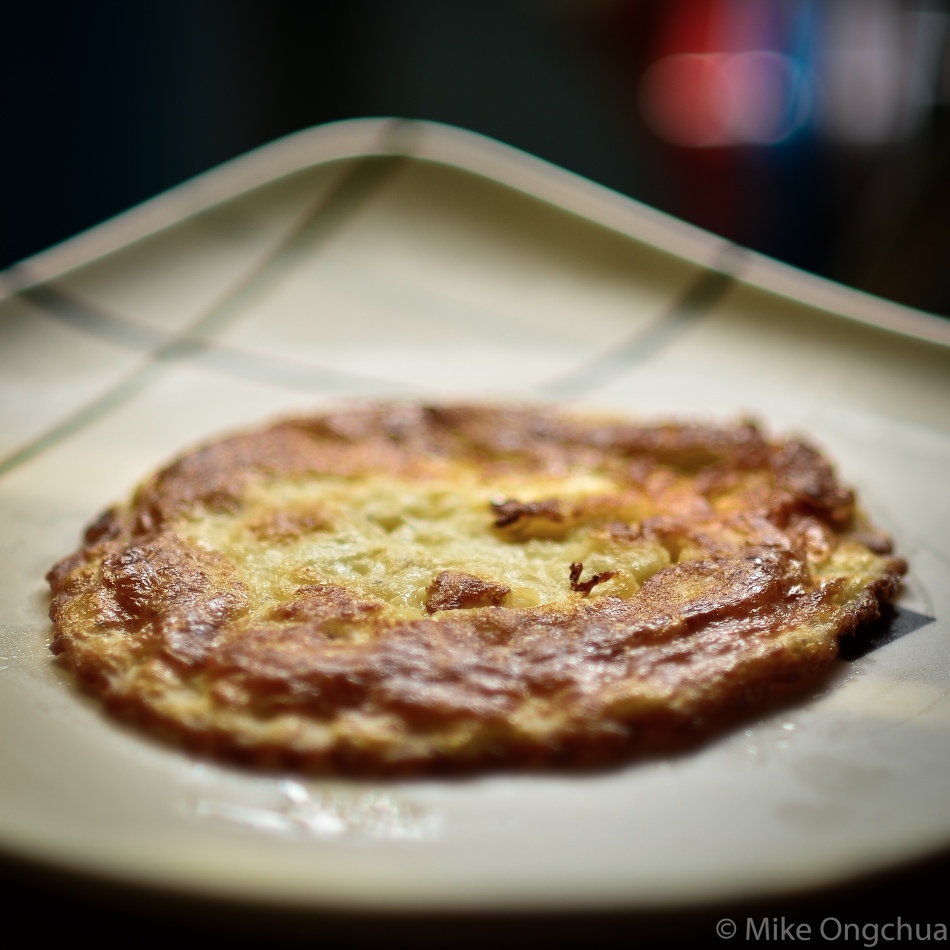 Although I found the taste a bit salty for my palate (I must’ve added a pinch too much), I was glad my family liked it. The right salty soft-crunch on the sides with the melted cheese inside providing that final oomph! Oh yeah.

I still had to create the default order for the day though for my youngest — the sunny side up.

Before January is over, I’d like to post this as my contribution to the DOT’s ongoing campaign, “It’s more fun in the Philippines.”

This unrehearsed jump shot was taken in a municipality near Iligan City. Behind is Iligan Bay. See source image.